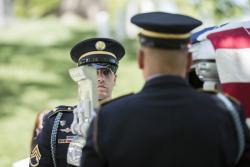 Frank was being interred with his brother, U.S. Navy Chaplain (Lt.) Robert Brett, who was interred in Section 2 near Chaplains Hill, in 1998 (after being moved from St. Mary’s Manor in Penndel, Pennsylvania).

Robert joined the military first out of the two, signing up for the Naval Chaplaincy School and Center in Rhode Island during the Vietnam War. He was assigned to the 26th Marine Corps regiment at Phu Bai in Vietnam and on Feb. 22, 1968, during the 77-day Seige of Khe Sanh, died with seven others when they were hit by a 122-millimeter rocket. Robert was posthumously awarded the Purple Heart and the Legion of Merit.

Frank joined the Army months after his brother’s death and volunteered to go to Vietnam where he was assigned to the military police and earned honors including a Bronze Star for valor in 1970. After serving as a chaplain for 30 years, he retired in 1998.