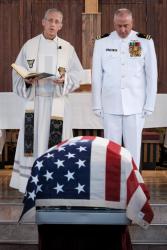 Father Paul Hurley, left, Maj. Gen., Chief of Chaplains, U.S. Army (Ret.) presides over the funeral of Navy Reserve Cmdr. James B. Mills, killed during the Vietnam War, June 24, 2019 at the Fort Myer Memorial Chapel, on Fort Myer, Virginia, prior to Mills’ burial at Arlington National Cemetery. On Sept. 21, 1966, Mills, 26, of Bakersfield, California, a Naval Radar Intercept Officer (RIO), was assigned to Fighter Squadron Twenty One, aboard the, USS Coral Sea, flying in an F-4B in a flight of two aircraft on a night armed reconnaissance mission over then-North Vietnam. During the mission, the other aircraft lost contact with Mills’ aircraft, and his plane did not return to the ship. No missiles or anti-aircraft artillery were observed in the target area and no explosions were seen. An extensive search was conducted with negative results. Based on this information, Mills was declared missing in action. Between 1993 and 2003, the crash was investigated was investigated more than 15 times, with no success. A 2006 investigation led to a possible underwater crash site, which was confirmed to be Mills’ aircraft in 2011. Over the next six years, numerous excavations were conducted of the underwater crash site. In June 2018, a final excavation was conducted, finding additional remains. On Aug. 20, 2018, Mills was accounted for by the Defense POW/MIA Accounting Agency.