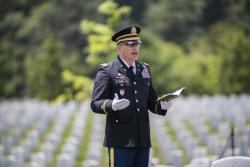 June 6 marked the 75th anniversary of the D-Day invasion on the beaches of Normandy where more than 165,000 Allied troops landed along the French coastline to fight Nazi Germany. Mann was among those Allied troops and during his Army career, earned three Purple Hearts and seven Bronze Stars.

More than 9,000 Allied soldiers were killed or wounded on D-Day but Mann survived and lived to be 96 before passing on March 30, 2019. Mann’s eldest son, Carl W. Mann II, received the flag from his father’s casket.