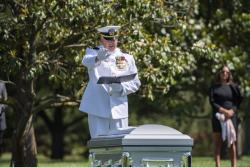 From the Defense POW/MIA Accounting Agency: On Sept. 21, 1966, Mills, a Naval Radar Intercept Officer (RIO), and the pilot, U.S. NavyCapt. James R. Bauder, were assigned to Fighter Squadron Twenty One, aboard the USS Coral Sea, flying in an F-4B in a flight of two aircraft on a night armed reconnaissance mission over then-North Vietnam. During the mission, the other aircraft lost contact with Mills’ aircraft, and his plane did not return to the ship. No missiles or anti-aircraft artillery were observed in the target area and no explosions were seen. An extensive search was conducted with negative results. Based on this information, Mills was declared missing in action.
Between 1993 and 2003, the loss of the Bauder/Mills aircraft was investigated a total of 15 times, with no success. In 2006, during Joint Field Activity 86, the investigation led to a possible underwater crash site. Five underwater investigations were required in order to determine the aircraft wreckage correlated to Bauder/Mills’ loss. In 2011, the Air Force Life Science Equipment Laboratory, now an element of DPAA, was able to positively identify the recovered wreckage as the Bauder/Mills aircraft.
Between 2010 and 2017, Underwater Recovery Teams (URT) from DPAA conducted excavations of a submerged aircraft crash site in the waters immediately off Quynh Phuong Village, Quynh Luu District, Nghe An Province, Vietnam. During the excavations, numerous pieces of aircraft wreckage, consistent with the Bauder/Mills aircraft, were found, as well as possible osseous material. The remains found were identified as Mills’ pilot, Bauder.
In June, 2018, a DPAA Joint Recovery Team conducted another excavation, finding additional remains. To identify Mills’ remains, DPAA and the Armed Forces Medical