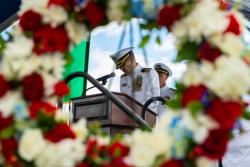 190606-N-SH284-0021 BREMERTON, Wash. (June 6, 2019) Cmdr. David Slater, chaplain, Naval Base Kitsap, delivers the invocation during the Naval Base Kitsap 77th Anniversary Battle of Midway Remembrance Ceremony on the Bremerton boardwalk. The Battle of Midway is regarded as one of the Navy’s, and the nation’s, most historically significant naval victories. The battle occurred June 3-7, 1942, and changed the tide of the war in the Pacific and the course of world history. (U.S. Navy photo by Mass Communication Specialist 2nd Class Vaughan Dill / Released)