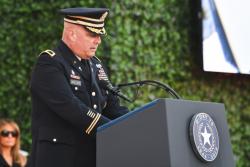 More than 1,300 U.S. Service Members, partnered with 950 troops from across Europe and Canada, have converged in northwestern France to commemorate the 75th anniversary of Operation Overlord, the WWII Allied Invasion of Normandy, commonly known as D-Day.