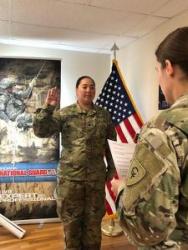 Indiana National Guard Sgt. Jessica Teegarden extends her military service for one year, Sunday, May 12, 2019. Teegarden, and administration sergeant, is scheduled to deploy with the 38th Infantry Division’s headquarters battalion and serve as the secretary of general staff while overseas in the Middle East.
“I initially joined the National Guard because of my family,” said Teegarden, who’s served 11 years with a combat deployment to Afghanistan. “I can trace family members who have served all the way back to the Revolutionary War.”
Teegard said she plans to become an active-duty Army chaplain after her deployment to support Task Force Spartan. Courtesy photo