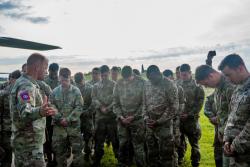 Chaplain says a prayer with paratroopers prior to leaving at the Cherbourg – Maupertus Airport on June 9. Parachute Rigger prepares parachute before airborne operation. More than 1,100 parachutes sailed above Sainte-Mere-Eglise, France, to commemorate the 75th Anniversary of D-Day June 9, 2019. Allied Forces began the liberation of Europe on the beaches and in the skies of Normandy during WWII. Nineteen aircraft from multiple nations and paratroopers from Belgium, France, Germany, the Netherlands, Romania, UnitedKingdom and the United States dropped civilians and Soldiers, both freefall and static line, in front of tens of thousands of spectators. Over 1,300 U.S. personnel have been supporting more than 80 ceremonies in the region since June 1. U.S. Army photo by Sgt. Dommnique Washington, 7th Mobile Public Affairs Detachment