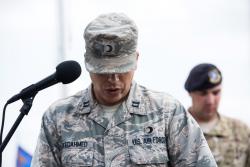 U.S. Air Force Capt. Tamer Sayedahmed, 502 Air Base Wing chaplain, gives the invocation during the National Police Week closing ceremony, May 17, 2019, at Joint Base San Antonio-Lackland. National Police Week honors those who have sworn to protect and defend, and pays special recognition to those law enforcement officers who have lost their lives in the line of duty for the safety and protection of others. (U.S. Air Force photo by Sarayuth Pinthong) 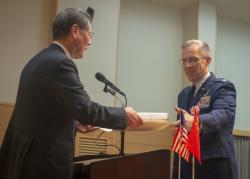 Lt. Col. Dale E. Marlowe, 374th Airlift Wing Chaplain, accepts the Good Deed Award for Yokota Air Base Chapel Team during a ceremony at the Meiji Shrine, Tokyo, Japan, May 18, 2019. The Chapel was one of the groups from Yokota Air Base to be recognized for helping within the local community. (U.S. Air Force photo by Airman 1st Class Brieana E. Bolfing) 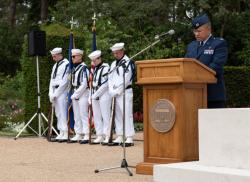 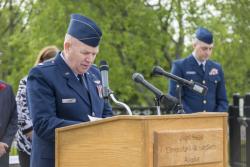 U.S. Air Force Lt. Col. Kim Bowen, Joint Base Elmendorf-Richardson senior chaplain, provides the invocation during the Anchorage Remembers Memorial Day Ceremony May 27, 2019, in Anchorage, Alaska. Observed the last Monday of each May, Memorial Day honors the women and men who have given their lives while serving in the U.S. military. (U.S. Air Force photo by 2nd Lt. Brigitte N. Brantley)